Recent attention to FPV racing and FPV experience shows that visual feedback from a teleoperated platform can give a very immersive experience. A FPV quadrotor platform was built to try the FPV experience and the results was satisfying. Visual Feedback is done using a video telemetry on 5.8GHz band. APM 2.7 ruuning Arducopter was used for the flight controller. Using the minim OSD (On-Screen-Display) the video telemetry shows flight data during flight. 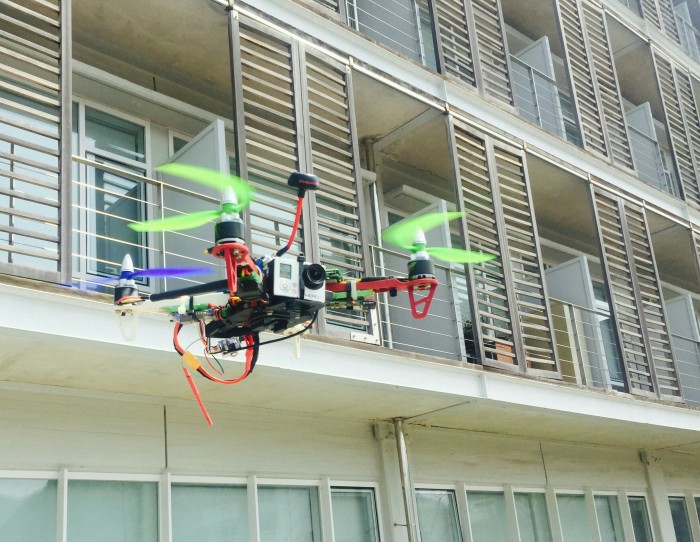 The system consists of a Flight controller, power system and communication systems. For the flight controller, APM 2.7 from hobbyking running Arducopter v3.1 was used. Arducopter is a very nice platform which provides functions such as autopilot and WP navigations. The flight data can be accessed through the MAVLink protocol which can be accessed through a PC or even mobile devices.
Communication consists of the communication module for video telemetry and flight data. Flight data telemetry was done using a 3DR telemetry module. The module uses 433 MHz and communicates on AFSK. The Flight controller communicates with the telemetry module with UART. Video telemetry was done using an immersionRC 5.8GHz 600MHz video telemetry module.
The power system consists of an ESC, motor and battery. The whole system runs on a 3000mAh 3S Li-Po Battery. Motor spins a 8X4.5 prop spinning a 1200kv NTM Propdrive series motor. The estimated flight time can be seen in the next section.

Performance was estimated using a simple model. The assumptions are that the quadrotor maintains hover flight through out the flight profile and has 70% efficiency of the motors.

4s setup shows better flight time and payload capacity. However the heavy battery causes the quadrotor to be heavier than the 3S setup. Increased payload capacity is due to the higher maximum thrust. Flight test result shows (as the green dot) slightly longer flight time but I believe it is due to the stored charge that is providing thrust even after the voltage has dropped.

Depending on where the compass calibration had been done, loiter performance may degrade pretty badly.

I added a battery bay to open up space for the FPV gear and caemra. Using a battery view prevents from the props coming into the view.

2 thoughts on “First-Person-View Quadrotor for Teleoperation”